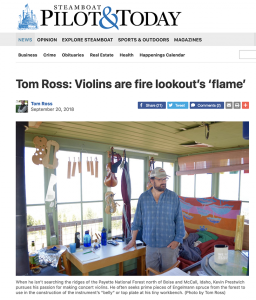 By popemaster / February 7, 2019 / Comments Off on Great Article | Violins are fire lookout’s ‘flame’

PAYETTE NATIONAL FOREST, IDAHO — It hadn’t crossed my mind Aug. 25, as we set out on the 3-mile hike to the Granite Mountain fire lookout in southwestern Idaho, that there might actually be a human being manning the boxy living quarters atop the tower. To be sure, there were enough forest fires burning in…